Australia is a world leader in loyalty programs, with almost 80% of consumers currently or previously enrolled in a scheme. Firms across the economy are using these programs to build brand loyalty, with the ACCC estimating that the average Australian is a member of between four and six different programs. However, these programs are increasingly rewarding their providers rather than their members.

While loyalty programs were originally introduced to encourage repeat customers and brand loyalty, companies have become more sophisticated in using them to generate revenue. Many companies are using and selling the significant amounts of customer data these programs generate to drive sales of other products and services.

Much of the revenue generated by these programs comes from selling consumer data to third-party companies and from partnership programs with affiliated companies. Both programs have successfully integrated with many credit card offerings, allowing customers to earn points on the purchases they make.

According to industry research firm IBISWorld, both programs operate under a model known as a coalition points-based scheme, whereby providers sell points in their own loyalty programs to other companies. Other companies then offer these points to their own customers, who can use them in the providers program . These schemes are proving increasingly successful and are hugely valuable in the Domestic Airlines industry, the International Airlines industry and the Supermarkets and Grocery Stores industry.

Other commonly used models for loyalty programs include:

‘To capitalise on the popularity and success of loyalty programs, firms in other have also launched their own loyalty programs. For example, Telstra and Optus have introduced similar schemes, known as Telstra Plus and Optus Perks,” said IBISWorld Senior Industry Analyst, Michael Youren.

New entrants to the Telecommunications Services industry have increasingly undercut the established players’ ability to compete on price. As a result, Optus and Telstra are using their loyalty programs to position themselves as a premium service with other associated benefits, allowing them to charge higher prices. 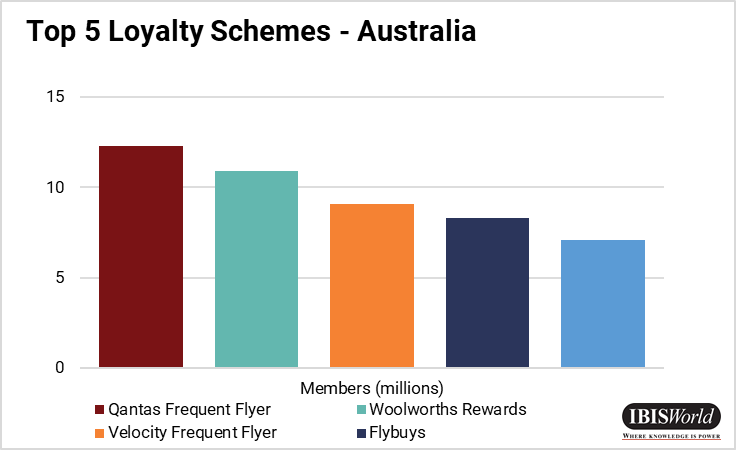 What should customers consider?

All consumers need to carefully consider whether they are actually getting value from loyalty programs. Many schemes use rewards and tiered membership levels to encourage customers to spend unnecessarily. In many cases, buying a product outright is cheaper than spending the extra money required to attain a reward or higher membership level. As a result, consumers need to be able to work out what the return on their extra spending is.

While some good deals do exist, loyalty program providers constantly monitor and update their offerings to ensure that loopholes are closed. Most larger points-based schemes tend to match the number of points needed for a product with its dollar value. Although some inconsistencies in the cost and point value of rewards can be found at times, these are rarely significant. However, some providers do offer promotions that can benefit consumers.

For example, Qantas and Virgin Australia occasionally have special offers on points transfers or certain products or flights. These promotions can benefit consumers that already have points or have already planned to purchase goods or services from these companies.

‘Though some companies offer affiliated products in their schemes, they will usually offer the best value per point on their own products. For example, airlines occasionally offer special discounts on the points needed for certain flights. These rewards can offer the best dollar value return on points, though these will often be flights to less desirable locations or at less popular times of the year,’ said Mr Youren.

Another concern for consumers is how loyalty programs use their data, which has recently received special attention from the ACCC. The terms and conditions accompanying loyalty schemes often state that companies have ownership of a customer’s data. This data can be used to build customer profiles, which detail spending habits and other personal information. These data profiles can then be sold to third parties, which use them for marketing purposes. Data provided in these profiles ranges from email addresses for mailing lists to detailed information for use in more elaborate analysis.

‘Although many companies state that the data they use and sell is deidentified, many consumers aren’t aware that personal data can also be gleaned from other sources. For example, companies may be able to identify credit card information based on past linkages between loyalty cards and credit cards,’ said Mr Youren.