Australia’s motor vehicle dealers and wholesalers have faced difficulties over the past five years as sales of new cars have continued to decline. However, booming demand for electric vehicles is offering these industries a ray of hope. According to industry research firm IBISWorld, declining property prices across many of Australia’s major cities and falling discretionary incomes have led consumer confidence to become negative. Consequently, consumers are feeling less optimistic about their finances and are increasingly delaying purchases of new cars.

Additionally, firms in the Motor Vehicle Dealers and Motor Vehicle Wholesaling industries are still contending with tightened lending regulations due to the fallout from the Financial Services Royal Commission. This trend has reduced access to finance for many consumers and therefore made new car purchases less attainable. Overall, sales of new passenger vehicles are expected to fall at an annualised 0.4% over the five years through 2018-19.

According to IBISWorld, sales of electric and hybrid vehicles are surging despite the decline in new car sales. A recent influx of electric vehicles has hit the Australian market. The hybrid Toyota RAV4 and Corolla have recently entered the market, along with the hybrid Mitsubishi Outlander. Hyundai and Jaguar have also launched ranges of fully electric cars.

‘Increased availability, along with consumer concerns regarding fuel costs and the environment, has contributed to year-on-year sales of electric vehicles almost doubling between 2018 and 2019,’ said IBISWorld Senior Industry Analyst James Caldwell. 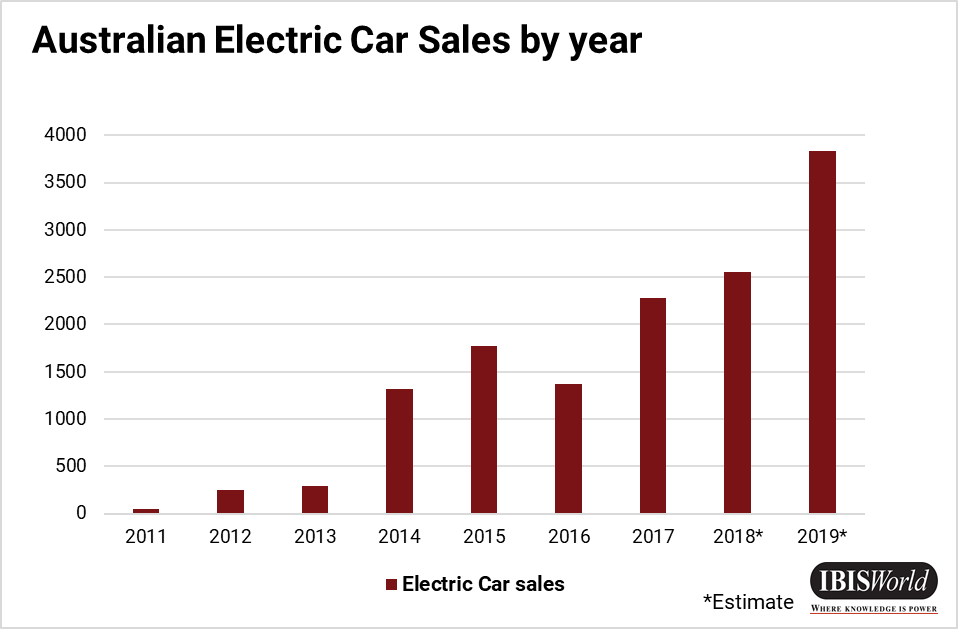 ‘Electric vehicles are more complex than traditional vehicles, driving up the cost of complementary services. However, operators in these industries will need to make a substantial investment in staff training and capital equipment to fully benefit from this increase in demand,’ according to Mr Caldwell.

In August, US-based Tesla launched its highly anticipated Model 3 electric vehicle in the Australian market. Tesla has delivered an estimated 2400 Model 3s in its first two months on the market, more vehicles than the company sold in all of 2017 and 2018 combined.

‘This sales volume is unlikely to be sustainable for the company over the long term. The Model 3 was launched in the United States in 2017, and many Australian orders were placed over the past two years. While the Tesla Model 3 retails for less than half the price of Tesla’s other vehicles, its price tag is higher than most other electric vehicles on the market. Falling discretionary incomes will likely encourage consumers to seek greater value in their electric vehicle purchases and increasingly move towards the lower end of the market,’ said Mr Caldwell.

The surge in electric vehicle sales over the past year has done little to reduce Australians’ preference for fast, heavy cars. Sales of large passenger vehicles, such as SUVs, continue to dominate new car sales. Australia’s bestselling car remains the Toyota HiLux SUV.

‘More Toyota HiLux models were sold in August 2019 than the total combined sales of electric vehicles. Additionally, monthly sales of luxury SUVs doubled in September 2019, driven by the launch of the new BMW X7 and Audi Q8,’ according to Mr Caldwell.

This trend towards faster, heavier vehicles contradicts the surge in environmentally friendly electric vehicles. This trend suggests that not all Australians are ready to jump on the electric vehicle bandwagon.